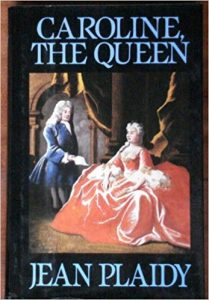 Third in the Georgian Saga, Caroline, the Queen continues the story from Queen in Waiting with Caroline of Ansbach and George II’s reign as King & Queen of England after the death of George I. At this point, Caroline has given birth to their seven children, the oldest still living in Hanover and a stranger to the rest of the family. Frederick, Prince of Wales, is restive–wanting to join his family in England and live in an arrangement similar to the one his father had as Prince of Wales. The family, however, does not like Frederick and wishes the other male child, William, could be the Prince of Wales.

Having not yet read Queen in Waiting, I’m not sure on the full story as to why Frederick was such an outcast. His personality does not seem to be so very repugnant, and he’s not wild like the future generations of Georgian royals prove to be. The only thing I can think of is that the family is projecting their hate for George I onto Frederick because he was taken from them by his grandfather at an early age. I will circle back to this review after I read the previous book.

And so, we have the King, Queen and Prince of Wales at odds throughout the narrative. I did not at first find much interest with George II and Caroline’s personalities, but about halfway in–once side stories from more intriguing historical figures were inserted–the story started moving along. George II, much like his grandson George III, became more and more ridiculous in his temperament and actions to the point where it was a comic relief when he made his exclamations of “baboon” and “boobie”! Readers may gawk at the lengths Caroline went to keep his favor, though he was her inferior intellectually, yet by the end George’s devotion is portrayed admirably.

As mentioned the side stories in this particular Plaidy novel greatly support the overall view of the royal family and Georgian England. The author’s Bibliography for this volume is extensive, citing personal memoirs of Lord Hervey and letters of Lady Mary Wortley Montague as sources. Lord Hervey, in particular, is a star character, as he brings wittiness with truth. As quoted in my previous post about the side characters, Caroline says, “It is so much more clever to be witty and kind, Lord Hervey, than witty and cruel.” This Lord Hervey is, but usually sarcastically–not that George II picks up on it!

When ranked with the other books in the Georgian Saga, this is not one of my favorites, but some of the characters are intriguing enough to be considered novel worthy in their own right.

Note: The title’s significance is in the emphasis placed on Caroline’s title of “Queen” because she in every way wields the power, although poor old George did not know it!

License and lechery sully the English throne–as a valiant queen fights for the future of her dynasty.

It was an age of luxury–and oppression; of acid-tongued fops and double-dealing temptresses; of kingly tyrants and royal martyrs. It was the reign of George the Second and his wife, Caroline, the Queen.

For Queen Caroline, the path to the crown had been torturous; and, even when it was achieved, her enhanced station only added to her suffering. Seeing in her pompous, philandering bully of a husband the mirror image of his own despised father, and, in the Prince of Wales, a bitter antagonist to his father’s will, Caroline vowed to keep the House of Hanover alive and assumed the reins of power for herself. But to do that, she incurred the resentment of her subjects and the open scorn of George the Second, the husband who so hated–and adored–her.

In this, the third volume of her brilliant Georgian Saga, Jean Plaidy, tells a sweeping tale of courage and undying passion, set against a background rich in colorful characters and vivid events.