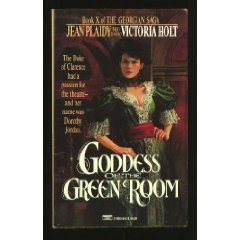 Goddess of the Green Room

Dorothy Jordan, actress extraordinaire and royal mistress, was unlike most woman in her position: she was honest, loyal and completely selfless. She always used her pay to take care of her loved ones, and was devoted to one man at a time, even if he didn’t deserve her.

The daughter of an affluent, Irish actress, Dorothy was born for the stage. When her father left and her mother was too ill to work, she made the money the family needed to survive. So much they depend on her that she had to do things that were against her better judgment (and her values) to keep the bills paid. One of such was becoming the mistress of a selfish and vindictive theater manager.

She finally had enough of that scene and moved to England to try her luck, and became an instant hit. A few years acting in the provincial theaters and she received an offer from London: Richard Sheridan and Drury Lane! She became the most popular comedy actress and continued to be adored by the public throughout her acting career.

Perhaps the most notorious scandal Mrs. Jordan was involved in is her role as the Duke of Clarence’s mistress. They lived together for 20 years and had 10 children before he left her to pursue various young heiresses, as he was deep in debt and perhaps going through a mid-life crisis as well.

Dorothy is a very likable character, but she gives too much and it’s heartbreaking to see all of the bad things that happened to her. This is a great story and covers much on the actors and actresses of the time, as well as, the politics – especially between Pitt and Fox. Even so, I didn’t enjoy reading about Dorothy’s problems and I wish she had had something to hold on to at the end.

The Prince Regent is tolerable in this novel, which is a complete change from a Plaidy novel I read earlier this year, Indiscretions of the Queen (Caroline of Brunswick, Princess of Wales). It is strange that she could write a character with so many facets that he is likable in one scenario and detestable in another – and it still makes sense. Jean Plaidy was such a clever writer and her early studies in psychology really show in her novels.