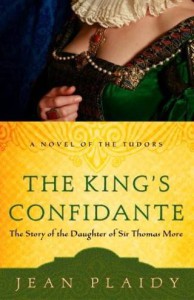 St. Thomas’s Eve, republished as The King’s Confidante, is a story of the life of Sir Thomas More – scholar, lawyer, councilor to the King and ultimately Chancellor, after the fall of Wosley. But most importantly to More, he was a loving husband and father, as well as father-figure to many.

The story begins with More’s difficult decision to pursue a family life instead of becoming a monk — something he will continue to question throughout his life. Though he was a family man at heart, he was also deeply religious, bordering on fanatical worship of the Catholic faith. His relative open-mindedness in the humanist respect when writing Utopia did not extend to his own deep-rooted faith. As the years passed he seemed to lean more and more to the tyrannical when it came to religion. He personally answered Martin Luther and persecuted heretics.

Even so, More is such a likeable character in this novel. He is kind, thoughtful and generous. He treats everyone with respect and the utmost fairness. He is a perfect minister on the King’s council… until Henry elevates him under the impression that he will do as told. Henry VIII had much respect for Sir Thomas More, and at first was amused by his honesty and integrity, but soon learned that More would stand in the way of his divorce from Katherine of Aragon.

This novel is the story of a happy family that continually grows as adopted children, step-children, spouses and grandchildren, most of whom live in the household, flourish under More’s love and devotion for learning. Many scholars, artists and the like find solace in the More home as well, which adds even more culture to the atmosphere.

I don’t feel that the reprint title, The King’s Confidante, was a good choice. He wasn’t seen as inside the King’s intimate circle. Henry was amused by him and somewhat valued his honesty, but I would not put him in the category of ‘confidante’. I think publishers are really overusing the terms king and queen these days to sell books, and this was the only thing they could come up with. I much prefer St. Thomas’s Eve, which has a meaning pertaining to the story.