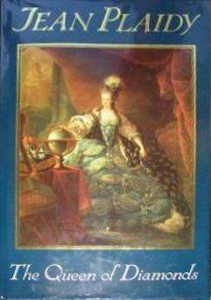 The Queen of Diamonds

The affair of the diamond necklace rocked the monarchy of France and precipitated the French Revolution. The insanely gaudy and expensive diamond necklace was originally intended for Madame du Barry, mistress of Louis XV, but his death came before the completion of the necklace. At almost 2,000,000 livres, the cost was more than anyone could afford — apart from royalty. The jewelers Boehmer and Bassenge had hoped the new Queen, Marie Antoinette, would buy it and save them from bankruptcy, but she refused stating that the money was better used to equip the military.

Cagliostro, a charlatan working for a secret society, finds himself traveling to Paris on a mission. On the way he meets the Cardinal de Rohan who, out of favor at court, dreams of being a political power behind the throne as well as a favorite of the Queen, for whom he harbors tender feelings. In a series of events that seem to come together almost as if there was divine intervention, a couple joins the party of conspirators, and each participant has his or her own intentions of advancement.

Jeanne de la Mott-Valois is descended from an illegitimate son of Henri Deux, and this she flaunts to any who will listen. As a result she earns a small pension from the crown, but she craves much more. She is a very clever con artist who dominates her soldier husband and schemes to turn their existence from poor plebeians to high society. She becomes the Cardinal’s mistress with extortion in mind, and soon a seed is planted in her mind by Cagliostro: Why shouldn’t she become friends with the Queen, or appear as though she has? Together, with the jewelers who are near ruin because of the diamond necklace, they could convince the Queen to buy the necklace.

With tempers in France running high against the monarchy, the King and Queen cannot afford a fresh assault on their reputations, but this is exactly what happens when it is known that there was a plot involving the Queen. Through no fault of her own, Marie Antoinette loosened the stone that toppled the monarchy of France.

With each character with his or her personal agenda in mind, this is truly a historical mystery and the first I’ve read of Jean Plaidy written in this fashion. Even so it is no less historically accurate and even more verbose than usual.