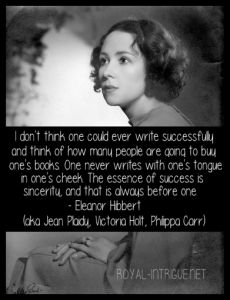 Special thanks to Pauline of the Jean Plaidy / Victoria Holt Facebook Group who found the link originally on the website Eleanor Hibbert Explained.

I typed the below transcript by ear, so there may be some mistakes and discrepancies.