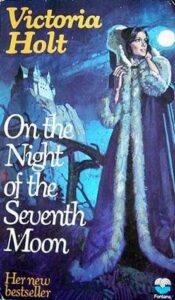 Today is once again the anniversary of Eleanor Hibbert’s death, and I usually strive to have new content available here on this digital shrine. I have been reading On the Night of the Seventh Moon, but because I am taking careful notes and reading other books simultaneously, it’s a slow-go. I will say this–it’s unusual compared to her others I have read in that it actually gives a concrete timeframe (1859-1901). It’s set in both England and Germany, near the Black Forest. The heroine, Helena Trant, is attending a female seminary where she meets a mysterious man. She’s then called home to England, where her life is apparently mundane and she’s brooding over that chance encounter.

The story is full of German fairy tale references; one quote I noted reads, “The mountain and forests are beautiful but they are also cruel, which is why there is always a hint of cruelty in the fairy tales of the forest.” Words noted within the first 30 pages: aberration, tempestuous, reverently, inhibitions, wheedled, castellated, frivolous, implacable, rendezvous, temporized, exuberantly, abstemious, unscrupulous, pedantic, lingeringly, and hypochondriacal. Period mentions that set the tone include a wagonette, naphtha lights, and the melodies of Schubert & Schumann.

For generations, Victoria Holt has dazzled and entertained millions of readers with her spine-tingling novels of romantic suspense, On the Night of the Seventh Moon is one of her most evocative, magical, and chilling. Come take a journey into a dark and shadowy forest where nothing is as it seems…

On the Night of the Seventh Moon, according to ancient Black Forest legend, Loke, the god of mischief, is abroad in the world. It is a night for signing and dancing. And it is a night for love.

Helena Trant was enchanted by everything she found in the Black Forest–its people, its mysterious castles, its legends and lore. Especially its legends of love. Until the day she started to live in one of them and the enchantment turned suddenly into a terrifying nightmare…