On this 30th anniversary of Eleanor Hibbert’s passing, I wanted to post fresh material and as I have not made a Google search on Eleanor Hibbert in quite a while, I decided to take a deep dive.

A Talk with Eleanor Hibbert and Helpers is a New York Times article that was published 45 years ago, in August of 1977.

This particular quote sticks out, and it should be noted that she accomplished this feat: “My only specific goal is that by the time I die, I want to have written the whole panorama of English history from the Norman Conquest to the death of Victoria.”

Another resource I found several years ago is an Australian historic newspapers website called Trove. As it’s public domain, I’ll share a few items I found interesting. If you’re looking for obscure, early works, you can find some of the author’s serials and short stories by searching her maiden name, Eleanor Burford.

Royal-Intrigue.net is listed in “External Links” on Wikipedia’s page on Eleanor Alice Hibbert, but not ranking well on Google any longer. I do hope to get back to posting more than twice a year! 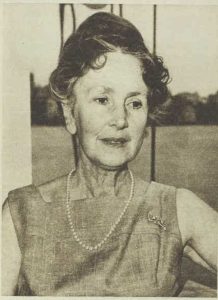 ROMANCE IS HER FAME AND FORTUNE

Don’t sigh for “glamorous” Tudor times, says popular novelist. The drains were very dirty — and so were the clothes and the hair.

“LIVE in the Tudor period?” said Eleanor Hibbert. “Oh, my dear, no. It sounds romantic, but think of all the grime, the dirty drains, the hair filled with vermin.” Eleanor Hibbert, the English author of more than 100 historical novels which have netted her a small fortune, made a slight grimace of disgust at the suggestion.

“Oh, yes, I know crinolines and all that sound glamorous to us today, but look at those enormous hairstyles. Did you know they used to become infested with lice? We should all be glad we are living in the 20th century with air conditioning, aeroplanes, comfortable ships, modern science — and telephones, the most wonderful things in the world.”

As an author, Mrs. Hibbert is unusual. She has two identities. As Jean Plaidy she writes what are described as “boisterous” novels of Tudor England, which require intensive research and deal with the lives of such People as Henry VIII, Sir Thomas More, and Mary Queen of Scots. At the moment they number 30 in all. When the Tudor books are finished, she says, they are to be followed by a Georgian saga. All these books will present a picture of English history as complete as she can make it.

Under the pseudonym of Victoria holt, she also pens highly romantic tales of suspense which generally have a Cornish setting during the Victorian era. One book, “Mistress of Mellyn,” said to have earned some $200,000 from hard-cover and paperback sales, translations, serialising, and film sales, was the result of Mrs. Hibbert’s determination to write a best-seller. It was based on a formula which included all the elements for appeal to a mass market. She once said she didn’t care about the critics. “It’s nicer to be read than to get good reviews.”

Mrs. Hibbert certainly doesn’t fit the picture of a highly successful author. I found her sitting tranquilly on the deck of the Oronsay, which was moored at the Overseas Terminal, watching the bustling ferries, the tall buildings silhouetted against the harbor, the un-finished Opera House, its sails soaring over Farm Cove. Slim, fragile, with gentle eyes and the softest voice, her brown hair coiled on top of her head, the only chore you could imagine her attempting would be an occasional visit to the garden to gather roses.

Yet she turns out four books a year, and her three months’ cruise on the ship, which was to take her to the Pacific Islands before returning her to England, was a working holiday. “My typewriter goes everywhere with me. I’m unhappy if I’m not writing; I’m absolutely dedicated to it. I really don’t think much about anything else,” she told me. “On this trip I’m Victoria Holt, because there are no facilities for research on board ship. Why do I always write in the historical periods? Well, I am successful in that field and my public expect it from me. Another reason — and I have just thought of it only this very minute — is that historical books don’t date. A modern book in another five years will be old-fashioned.”

“At this moment I have 35 books in print in hard covers, which is quite unusual. Pick up one I wrote, say in 1949, and it is quite right today. It is historically correct for the period, the idioms, the dialogue, the manners, the customs. And as for the enormous research involved in my Jean Plaidy writing. Well, it is a joy. I am passionately interested in history and I can’t read anything else while I am researching a book. It just isn’t work for me; it is a fascinating game. Yes, writing is really like any other job — hard work. I’m up at six each morning and I work through till 6.30 in the evening, with the usual breaks for meals. Now and again, if something special happens, I will break that routine, but very rarely. A lot of people fail at writing because they give up too easily. They don’t have the endurance or the stability to keep at it. Others are lazy, who want success im-mediately, and who have the idea that writing is just dictating a few paragraphs now and then in between having a wonderful time travelling around the world. If it is any encouragement to would-be authors, I had my first nine novels rejected. Of course, I was at the age when I thought I could set the whole world straight, and I must admit they were very lengthy books. My husband, who died three years ago, was interested in my work and a wonderful critic. He suggested I write something shorter. ‘The rejections won’t seem so bad that way,’ he told me. Well, I followed his advice and became quite successful. London newspapers started accepting my stories, and this encouraged me to go back to writing novels. So don’t let rejection slips worry you. If you have the urge to write — and every writer must have it nothing can stop you from being successful. Yes, I have made a for-tune from my writing and I don’t have to write to earn my living any more. But I will always go on writing because it is my whole life and I enjoy it more than anything else in the world.”

The Oronsay, on its return to England, will again call at Sydney for a few days when Mrs. Hibbert will be present for the launching of her paperback book “The Royal Road to Fotheringay,” the story of Mary Queen of Scots. “And I’m so looking for-ward to that,” she said, “because we’ll spend more than the three days we’re allowed this time and I do want to see more of your wonderful Sydney town. I love sitting here on deck and watching life go by. I am a city type, you know. I live right in the centre of London by Albert Hall, and all the people and the bustle here remind me so much of London. Most of the summer I spend my time at Deal, near Dover, in a charming old house. It was built as a hotel in 1680. I must say there are some things I don’t like about modern life. For instance, those tall, square buildings over there. Most uninteresting. London is full of them. Tall buildings destroy the character of a city. They are ugly, like those dreadful clothes young people are wearing today. Quite a lot of pretty young girls have pleasure in going around dirty. I think the whole thing is a plot by the ugly girls to make themselves be noticed. But fancy wasting youth and good looks like that! I wouldn’t like to be young again. Experience is a much greater asset than youth.”

“Your Opera House? At least it is an attempt to be something different. When I first saw it I thought it was a bunch of ships all moored together. I didn’t like it at all when I was told what it was, but it seems to be growing on me. I think I will probably like it before we sail.” 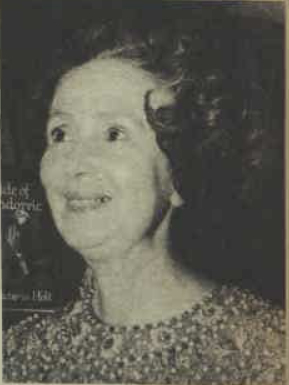 YOU’VE never read a Jean Plaidy?” said the little woman sitting opposite me looking shocked. I hung my head and mumbled a sorrowful apology. “Never? Well, we will have to rectify that, won’t we? I wonder which would be the best to begin with?”

Eleanor Hibbert mentally went through the many titles of books she’d written. And there’s some choice. As Jean Plaidy and Victoria Holt she has written more than 60. “You know about Henry VIII? Yes, of course you do. I’ll get you a copy of ‘Murder Most Royal,’ about Anne Boleyn and Henry.”

Unfortunately, in the Sydney offices of her publishers, Collins, we couldn’t find a copy. Undaunted, she pulled down “Royal Road to Fotheringay” from the shelves. “Here you are. This is just as good.”

The Plaidy books were the first to be born about 20 years ago. They are history novels, deeply researched about actual people. Victoria Holt followed ten years later. This author is pure fiction – distraught heroines, and romance, and lots of draughty castles.

Mrs. Hibbert could be a heroine of one of her romantic Holt novels. She looks incredibly fragile, small, thin, and fluttery, and dressed in ruffles. Underneath she is a determined, businesslike woman with enormous self-discipline. The sort of discipline which never allows her to take a holiday from writing.

Even while in Australia to escape the dreaded British winters, she writes every morning. “I always write Victoria Holt while I’m away. I don’t need masses of research books for that.” When she’s at home in Kensington, she spends her time between the various London libraries, the British Museum, and her typewriter.

She has just finished an 11-volume Georgian saga, which takes in the reigns of King George I through to the death of George IV. “It’s not a strain at all. I enjoy it. I actually live with the characters. By the time I finish my research I know how they talk, almost how they would act.” Her readers are devoted and her fan mail is tremendous.

“Women like romantic novels. The demand has never died. That is why it is only women who write to Victoria Holt. But for Jean Plaidy I get mail from both men and women, young and old. Now Plaidys are being used in some schools to make history more attractive. Nothing shocking. I tell history the way it is.”