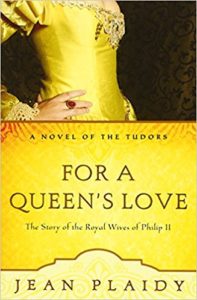 Set against the glittering courts of sixteenth-century Europe, the Spain of the dreaded Inquisition, and the tortured England of Bloody Mary, For a Queen’s Love is the story of Philip II of Spain—and of the women who loved him as a husband and father.

Philip was a dark and troubled man, who, like many royals, had been robbed of his childhood. His first marriage, a romantic union with childlike Maria Manoela, brought him tragedy and a troublesome son, Don Carlos. Then followed marriage with the jealously possessive Mary Tudor, a political union that ultimately failed to bring Philip an heir that would solidify the unified power he so deeply desired. And finally, marriage again to a young bride Philip stole from his unbalanced son, sowing the seeds of brutal murder. But history is seldom what it seems, and in the hands of beloved author Jean Plaidy, we hear another side to the story of Philip II—the most powerful of kings who was at once fanatic, murderer, husband, father, and lover.

I feel it is necessary to add a brief explanatory note when writing of Philip of Spain, whose character has given rise to so much controversy.

From the extensive research which I undertook before writing this book, it would appear that two different men are being dealt with, so diverse and opposite are the appraisals of him. One is a conscientious lover of duty, a worthy husband, and a devoted father; the other is a cold-blooded monster, completely devoid of human feeling, without charm, gloomy, morose, and moreover guilty of several murders including those of a wife and son.

I wrote examples which come from two contemporaries: The French Ambassador, who witnessed his farewell to his dying wife, Elisabeth, said that her death was “enough to break the heart of so good a husband as the King was to her.” But William of Orange, on the other hand, charged Philip not only with the murder of his son Carlos, but of this same wife Elisabeth, which crime he declared the King committed because he wished to marry his niece, Anne of Austria, the richest heiress in the world.

I have come to the conclusion that the various judgments of Philip’s character have been greatly influenced in each case by the religion of the chronicler; and it has been my aim to clear my mind of prejudice, to cut away religious bias, and to discover the real man.