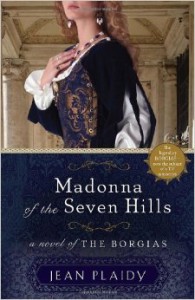 Madonna of the Seven Hills

The most beautiful woman in Rome, Lucrezia Borgia, was born into a family—and a destiny—she could not hope to escape . . .

Fifteenth-century Rome: The Borgia family is on the rise. Lucrezia’s father, Pope Alexander VI, places his illegitimate daughter and her only brothers, Cesare, Giovanni, and Goffredo, in the jeweled splendor—and scandal—of his court. From the Pope’s affairs with adolescent girls to Cesare’s dangerous jealousy of anyone who inspires Lucrezia’s affections to the ominous birth of a child conceived in secret, no Borgia can elude infamy.

Young Lucrezia gradually accepts her fate as she comes to terms with the delicate nature of her relationships with her father and brothers. The unbreakable bond she shares with them both exhilarates and terrifies her as her innocence begins to fade. Soon she will understand that her family’s love pales next to their quest for power and that she herself is the greatest tool in their political arsenal.

From the inimitable pen of Jean Plaidy, this family’s epic legend is replete
with passion, intrigue, and murder—and it’s only the beginning.

I hope that my readers will bear in mind the proverb Altri tempi, altri costumi, and adjust their mental vision to the fifteenth century when Popes took their vow of celibacy merely as a form, and when murder was so commonplace that an old Tiber boatman on seeing the body of the Pope’s son thrown into the river did not think it necessary to report it because he saw bodies thrown in every night.

Below are some of the books which have been a great help to me:

Lucrezia Borgia: A Chapter from the Morals of the Italian Renaissance. Ferdinand Gregorovius.

The Life and Times of Lucrezia Borgia. Maria Bellonci. Translated by Bernard Wall.

Chronicles of the House of Borgia. Frederick Baron Corvo.

History of the Italian Republics in the Middle Ages. J.C.L. Sismondi. (Recast and Supplemented in the light of historical research by William Boulting.)

Memoirs of the Dukes of Urbino: Illustrating the Arms, Arts and Literature of Italy from 1440 to 1630. (3 Vols.) James Dennistoun of Dennistoun.