I had hopes of reviewing the 9th book in the Georgia Saga in time for Eleanor Burford Hibbert’s birthday on September 1st, but I am only halfway through the book. Therefore, I thought I would post a midpoint review instead. It’s a lengthy one, so I think it works out well. 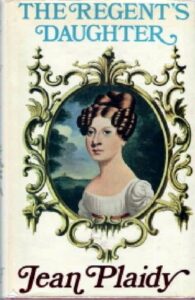 In spite of the hatred which existed between the Prince and Princess of Wales, a daughter was born to them—Princess Charlotte, heiress presumptive to the throne of England. Here she is seen in the midst of her family, bewildered as she becomes aware of the antagonism between her parents but always honest, forthright and sure of her destiny. ‘Nobody ever had a stranger set of relations,’ was her comment; and this seemed true. There was the Prince of Wales, the Regent, elegant charming but superficial, corpulent and middle-aged but still amusing the world with his love affairs; there was Princess Caroline, his wife, eccentric almost to insanity; the mad George III; the stern Queen Charlotte; the band of spinster aunts and the wicked uncles. The story of Charlotte’s marriage and its ultimate end makes one of the most appealing love stories in history and even its tragedy is lightened by the sparkling character of the lovable Regent’s daughter.

Ninth in the author’s 11-book series, The Regent’s Daughter follows Charlotte, only child of King George IV of England, from a precocious child through her untimely death at the age of only 21. This is not just Charlotte’s story, of course. It’s a recap of her mother’s story, Caroline of Brunswick, which the author covered in Book 8, Indiscretions of the Queen; Maria Fitzherbert, who was featured in Book 7, Sweet Lass of Richmond Hill; and George III, who had two installments with The Prince and the Quakeress and The Third George. This one also covers, as is the author’s trademark, lesser known historical figures. In this story these include: Frederica, Duchess of York, the “Old Girls” (George III’s many unmarried daughters), and the servants surrounding Charlotte.

Charlotte herself, though young, turns out to be an intriguing character. She’s smart, witty, and doesn’t miss a thing that’s going on around her. She’s knows how to manipulate, but she can’t quite master her emotions. She feels deeply her father’s dislike of her for simply being temperamentally like her mother, and is forever awkward in his presence, although she longs to please him. Others she has figured out and can mostly conform to the person she needs to be in their presence. At the halfway point in the book, she has latched onto a politically-minded young woman, so it will be interesting to see how this molds the young hoped-for monarch.

The wittiness of Charlotte, age 11:
Page 120 (Robert Hale, 1978 hb reprint)
‘I do not think it proper for Your Highness to bandy words with these people,’ admonished Lady de Clifford.
‘Bandy words! I was advising her to always tell the truth. Is that not a good thing? My lord Bish-Up tells me it is.’
‘I do not think it is wise to hold these conversations with beggars.’
‘Jesus did. So why not the Princess Charlotte?’
‘You blaspheme.’
‘I don’t see it. My lady, I don’t indeed. According to you, it is at some times good to follow Jesus . . . at others not. No, I think that was just how He would have behaved to that poor woman.’
Lady de Clifford put her hands over her ears. Sometimes she wondered with great trepidation what the Princess would do and say next.
What she did on this occasion was to whip up the greys and they galloped along at a great speed while Lady de Clifford clutched the side of the carriage in terror and exclaimed in dismay as they turned into a field.
‘Where are you going? This is Sir Thomas Troubridge’s field.’
‘I don’t deny it.’
‘I pray you turn back.’
‘Too late, my lady. Too late. Hold tight. That was a good one.’
The carriage went bouncing over the ruts.
‘Heaven save us,’ cried Lady de Clifford.
‘Nothing like exercise, my lady,’ Charlotte told her. ‘Nothing like exercise!’

Another great background character mentioned is James Gillray, who was a political cartoonist and caricature artist whose works today are widely recognized. Of the numerous side-stories are the many scandalous relationships of Charlotte’s uncles. Although they were raised in the strictest of households, they every one had either many affairs or a long-standing mistress set up as wife. Their adventures come to Charlotte through an indiscreet servant who supplies the newspapers with the scandalous cartoons, and through her brief visits with her mother.

The Prince of Wales is not quite Regent at this point in the story, but the health of the King is greatly in question. My midpoint read ends with George III’s favorite daughter’s early death, which will send him over the edge. I’m interested to see how this will affect Charlotte’s life, as she will become a bit more important politically once her father holds the reins of the country.

My reading of Plaidy’s works this year has been dismal as usual–this is only the second one I have soldiered through. As usual life has been in the way, but I am glad for the time spent poring over my favorite author’s books. They’re always introspective and tend to add needed tidbits of wisdom, such as this gem from last night:

“If there are things in life which give pleasure without harming others it is foolish to turn one’s back on them.”

The Regent’s Daughter, Pt. 2 review is upcoming. As for today, let’s celebrate the fact that we have so many books to enjoy from this author and those inspired by her writing! Happy Birthday, Ms. Eleanor!