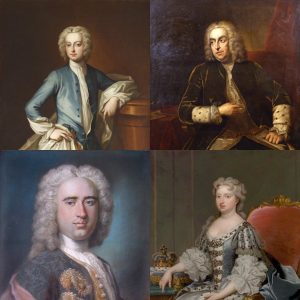 Of the many Plaidy books I have read over the last 16 years, Caroline, the Queen has taken me the longest to get through. It’s not all due to the story–I have been busy–but I have to admit that it is slow-starting interest wise. George II and Caroline aren’t exactly intriguing historical figures. However, once the narrative dips into some side stories, it gains momentum.

Top, left we have John Hervey, who is appointed a position with the Queen, although his family is of the opposing political faction and are trying to steer him away from his duty. Lord Hervey, for his part, is not loyal to the King and Queen (or rather the Queen and her Prime Minister, Walpole), but only enjoying being caught up in excitement and intrigue. He is a writer of verses, and enjoys pulling punches with his pen.

Top, right is William Pulteney who is actively trying to persuade Lord Hervey to his band of “Patriots” in writing for their political publication, The Craftsman. Although the story has not progressed this far, it appears he was Prime Minister for a couple of days in 1746.

Stephen Fox-Strangways on the bottom, left is Hervey’s “special friend” who precedes his famous nephew, Charles James Fox. In the story he is currently dealing with Lord Hervey’s budding friendship with the Prince of Wales.

The first scene in which Lord Hervey joins the court and speaks with Queen Caroline (bottom, right) she quips to Lord Hervey, “It is so much more clever to be witty and kind, Lord Hervey, than witty and cruel.” This particular set of characters brings fresh interest in the story, and I am excited to see it played out.

Plaidy’s style of going behind the scenes of the main focus (in this case, Queen Caroline) works well in expanding an understanding of the political maneuvering that would be hard to convey otherwise. Getting into the thoughts and motives of these background characters is a formula the author often used to her advantage, and one that other authors fail to get right.