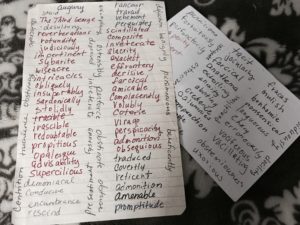 When I started reading Jean Plaidy books at the age of 24, I quickly noticed I’d need to keep a dictionary handy for the many words I’d either never heard of or rarely used in everyday conversation. I’m not sure why I decided to keep a running list, but for several years I would regularly jot them down (as seen in the photo).

Now, 14 years later, I’ve noticed I use many of these words and I know the definitions. I have encountered them in other books, but not very often. I’m not sure if the author’s vocabulary was a product of her origins and generation or unique to herself. I have read a few of her contemporaries, and while the language used is somewhat more complicated than today’s vernacular, none have equaled Jean Plaidy’s wording. Also, having read four of her various pseudonyms, I can say that the Jean Plaidy books include more of these words than the Burford, Holt and Carr books.

Perhaps she felt that history readers were rather more serious than those who were supposed to be reading for entertainment (as the Gothic/romance genres were viewed). Even the author herself stated, “…they are different publics, of course. Jean Plaidy’s public are people who like history or want to learn something about it, or know something about it and want to polish up what they already know. Victoria Holt readers are largely women. Jean Plaidy’s are both sexes, all ages. Victoria Holt’s are all ages, but women mainly. And they want a good story. They want to lose themselves in a story. They want characters whom they can love or hate but there must always be one with whom they can identify themselves and feel sympathy for.”