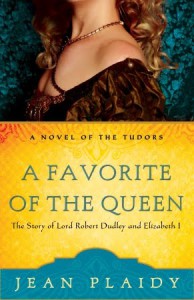 A Favorite of the Queen

The story begins with Robert Dudley’s father at the execution of his father, Edmund Dudley, who had been used as an example to the people that the new King Henry VIII would please his subjects. The elder Dudley was Henry VII’s cruel tax collector and as such deserved to die a traitor’s death. John Dudley grew up to regain both his family fortunes and titles, though it was hard-won through battle and diplomacy. He formed the right connections at court, married his children off well and set them on the path to prosperity. Unfortunately for the Dudleys, their reins on the government ended when they supported Lady Jane Grey instead of Mary Tudor on Edward VI’s death.

Elizabeth and Robert met in childhood through the royal children’s classroom. He found her haughty, yet fascinating and she found him too outspoken for someone she deemed beneath her. They next meet at the Tower when each is imprisoned by Queen Mary. Elizabeth is free to walk the grounds and soon finds a way to communicate with Robert, which soothed them both during those perilous months.

As promised, Robert was the first to inform Elizabeth of her sister’s death and she instantly made him Master of the Horse. From here the story is less detailed and moves swiftly through Elizabeth’s reign with Robert at her side. One of the most impressive parts of this novel is the descriptions of Elizabeth’s mindset. For example:

“To England the Queen was a symbol. She gathered handsome and chivalrous men about her; they must be gallant and adventurous. She wished to be to them a fair ideal, the mistress they all wished to serve because they were in love with her perfections; yet she was the mother, and their welfare was the clearest concern of her life. She was Woman, warm and human, yet because she was an anointed Queen, she was invulnerable and unassailable. She wanted her men to be bold, to perform feats of courage and adventure for her sake; these she rewarded with her smiles and favors. She was a spiritual mistress; they must be faithful to her; they must perpetually seek to please her, their thoughts of her, must be the words and thoughts of lovers. They must all be in love with her; to them she must be the perfect woman. But they must never forget that she was mistress of them all. And while to her handsome and gallant courtiers, to her statesmen and soldiers, she was the queenly mistress and beloved woman, they must constantly remember that to her people she was Mother—the all-embracing Mother-and her thoughts and her energies were directed toward the good of her people. She wished England to be a happy home for her people—a prosperous home—and as, to her belief no home could be happy and prosperous unless it were peaceful, she abhorred war.”

The book description of the reprint puts emphasis on the death of Robert’s first wife, Amy Dudley, which is understandable even though that particular event was not the basis of the story. Plaidy wrote an Author’s Note to explain her thoughts on the mysterious death and why she came to the conclusion that it was, in fact, a murder arranged by her husband. However, Amy’s death continues to haunt Robert throughout his life and in this sense Amy’s story is one of the main focuses.

This is not an amazing read for the Tudor expert, or really even the casual historical fiction fan with knowledge of the Elizabethan times. I cannot claim one event from the book was new to me, but then I have also read Queen of This Realm and My Enemy the Queen, which are both detailed reads on Elizabeth, Leicester and Lettice by Jean Plaidy. It was a good refresher, especially with the Queen’s martial issues, foreign relations and much philosophizing on her thoughts and behavior. Overall, I count it as an enjoyable read, but not one of my favorite Plaidy novels.

AUTHOR’S NOTE (as printed in the book)

In writing of what is undoubtedly one of history’s most puzzling relationships, it is perhaps advisable to add a few remarks in order to justify the conclusions to which I have come. This is particularly the case with regard to the mysterious death of Amy Robsart.

All that happened on that Sunday morning at Cumnor Place will never be known. Was Amy’s death due to accident, suicide, or murder? After studying available records my verdict cannot be anything but murder.

Consider the facts: The Queen was being pressed by her ministers to marry. She could not bear to forgo the attentions of Robert Dudley, and Robert could not give up the hope of sharing the throne. Thus Robert’s wife Amy stood in the way of the two ruthless personalities. The Queen, in politics the soul of caution, had always been reckless in love. Scandal was circulating throughout the country concerning the relationship of Elizabeth and Robert Dudley. People remembered Thomas Seymour. Before Amy died there was a strong rumor that her death was being planned; and when it was said that Amy was suffering from a fatal malady, many believed that to be a false rumor set in motion to explain the death which was to follow. So persistent were the rumors, that a physician refused to attend Amy, fearing to be accused of administering poison should she die. This was the state of affairs when her minister, Cecil, returning from Edinburgh, found the Queen strained and nervous, and, to his astonishment, heard from her lips that Amy would soon be dead. Cecil, appalled, hurried from the Queen, and was so distraught that, coming face to face with the Spanish ambassador, he could not keep his suspicions to himself. “The Queen and Lord Robert Dudley are scheming to put Lord Robert’s wife to death!” is what he said–according to the Spanish ambassador. And a few hours later Amy was found dead.

Why should the Spanish ambassador have written those revealing dispatched if the contents were untrue? Spain was no enemy of Robert’s at that time, and Robert had won Philip’s approval at St. Quentin.

An accident to Amy resulting in her death at such a time so convenient to Elizabeth and Robert is surely too incredible a coincidence to be accepted.

As for the suggestion of suicide, if Amy had wished to kill herself would she have chosen a method which, she must have known, might not result in death, but merely add acute pain and misery to her remaining years? Would any woman destroy herself in such a painful way in order to avoid being murdered?

Everything points to murder, apart from Amy’s strange conduct on that Sunday morning in sending all her servants to the Fair. Why did she–in perpetual fear of murderers–clear the house of all the servants on that day which was to prove so tragic to her?

I have looked to her maid Pinto for the explanation, because from her first came the suggestion of suicide. It seemed that this suggestion came simply and unwittingly from Amy’s maid; but was Pinto such a simpleton? What if the suggestion were not rung from her, but deliberately given? Might she not have known the true reason why the house was deserted on that Sunday morning? Let us consider what a woman would do when the whole country was hinting that she was about to be murdered. How would a devoted maid behave? As for my interpretation of Pinto’s feelings for Robert, it must be remembered that, during his two and a half years’ exile, he had lived in Norfolk and would have come into continual contact with Pinto; and if we can discover little of Pinto’s character, we know much of Robert’s.

It is the novelist’s task to present a convincing story and, when the characters actually lived, to adhere to facts obtained by research, only diverging from them with good reason, e.g., when they are unknown, and then only making careful and responsible deductions as an aid to the completion of the story. Therefore I offer my views of what happened at Cumnor Place in the summer of 1560.