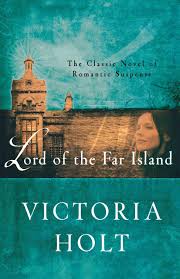 Lord of the Far Island

Ellen Kellaway was an orphaned poor relation living with a distant cousin who saw her as a burden yet educated her alongside her daughter out of obligation. Ellen saw some triumphs, but also suffered through some blows, but always persevered with her ebullient personality. It came time for a change, and opportunity presented itself.

Though she never knew her father, events took her to a far away Cornish island where Kellaways still lived. She learned about her mother, who had died when she was very young, and other family members through older generations and a sketchbook and diary found in her mother’s old room. The mysterious keeper of the island—a distantly related Kellaway—was either a friend or foe, and Ellen couldn’t figure out which. It became apparent that someone wanted her out of the way, and this intriguing story will keep readers transfixed until the end!

So far I haven’t met a Victoria Holt book that hasn’t captivated me and captured my rapt attention. This one is no different! By now I realize she has a formula for making out the true hero to be a villain, but it’s still difficult to peg exactly how the chips will fall. It’s hard for me to claim a favorite Holt novel—they have all been enjoyable and full of satisfaction.