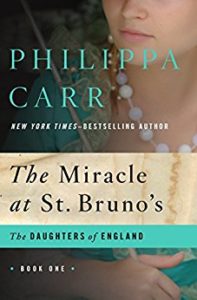 The Miracle at St. Bruno’s

The first of Carr’s Daughters of England saga is set during the Tudor era from 1522 (Henry VIII’s first marriage) to 1558 (ascension of Elizabeth I). It opens with a Christmas miracle in the form of a live male baby replacing the wooden one normally placed in the manger at St. Bruno’s Abbey, near London. Because of this “miracle” the Abbey received more visitors and gifts, and became quite wealthy. The story is told through Damask Farland, daughter of a prominent lawyer, who lived on lands next to St. Bruno’s.

Because she had connections close to the royal court, Damask is privy to the happenings surrounding the monarchy, and this advances the story, however, her own eventful life is just as interesting. She suffers great losses but has some happiness along the way. This is the first of many Holt/Carr books I have read that does not conform to her usual formula regarding the protagonist’s romantic relationship(s)–which was refreshing. Although somewhat farfetched in places, once the true characters of those around Damask are revealed, the plot makes more sense.

This story saw many of the characters evolve—not just the heroine—and this is one facet that the author always seems to get right. I’m excited to start the next in the saga, which continues with Damask’s daughter, Catherine. As with others of this series, this book can be read as a stand-alone as it does not leave loose ends.

This novel’s theme is religious strife of the mid-16th century and how it affected those attached to the Farland family and their neighbors. Henry VIII’s break from Rome upended the way of life in England by small degrees at first, but which snowballed into a period of absolute terror by the reign of his daughter, Bloody Mary. The country went from Roman Catholic to Reformed Catholic, flirting with Lutheran ideas to Protestant, and back again. It’s an interesting time to follow, politically and religiously. Having read many of the author’s books set in the same era, this one is unique in that it’s from the angle of ordinary people living through extraordinary times.

While reading this book, I have also been slowly taking in Hilary Mantel’s third book on Thomas Cromwell, The Mirror and the Light, via audiobook. Googling Thomas Cromwell does not bring up a favorable account of his character, but as readers know, there’s much more to the story than a list of bad deeds and assumptions. I highly recommend Mantel’s trilogy for a detailed and fascinating look at Tudor politics in the 1530’s.