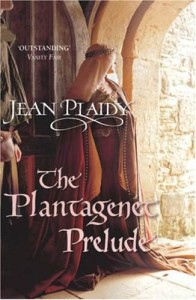 The Plantagenet Prelude was published 11 years before her autobiographical novel on Eleanor of Aquitaine, The Courts of Love, and focuses on the men in Eleanor’s life rather than Eleanor herself. I wasn’t expecting this proud, selfish woman that Plaidy portrays, as she was so much more likable in The Courts of Love. We get a better understanding of Louis, king of France and Eleanor’s first husband, and a much more intimate view of Henry, Duke of Normandy and later king of England.

First the book follows Eleanor from a 14 year-old bride, crusader, and several years of marriage to Louis that only produces 2 daughters. She then meets Henry and is determined to obtain a divorce (which she had been planning for years anyway) and marry the Duke, 12 years her junior.

Meanwhile, there is another relationship expanded upon – that of Henry and his Chancellor, Thomas Beckett. I really enjoyed the story of how his parents met. I believe that was my favorite part in this novel. I don’t know why I was expecting not to like Thomas (perhaps I had him mixed up with Bernard of France), but it has to be something I’ve read of him in the past, some other characterization. He was a very good and likable man in this book, and became a saint and martyr. He reminded me a lot of Thomas More, as he had like ideals and convictions.

A few years and many kids later, Henry and Eleanor find themselves king and queen of England, holding vast lands in France – but there is no longer a romantic bond between them. Henry has his Fair Rosamund and Eleanor begins to see where the true power lies… with her children.

The next book in this saga is Revolt of the Eaglets, where Henry comes up against his sons. It should prove interesting and I cannot wait to get through the entire Plantagenet saga.