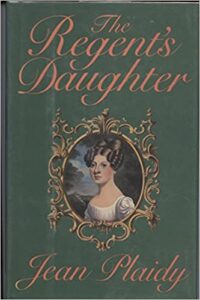 I wrote a precursor complete with book description on the previous post, here.

Princess Charlotte of Wales is not a heroine you’d expect to find the subject of a biographical historical novel. Even with a witty and charming characterization, her life was short and contained no major events—until her early death at the age of 21 upended the succession. Yet, Jean Plaidy created an eventful novel full of drama and intrigue. For Plaidy readers it is a familiar formula: create elaborate stories around the sometimes-mundane protagonist using background characters, well-known and obscure alike.

Speaking in terms of popularity, the Prince Regent filled this role positioned as antagonist. Plaidy’s villains, though, aren’t the usual ‘baddies’ who possess no redeeming qualities. She is over-generous with detailed personality quirks and sensible reasoning. The future George IV, for instance, was manipulative but nonetheless had a good sense of his position and was generally steering Charlotte in directions that would benefit the monarchy. He wasn’t a true foe, yet the chasm between Charlotte’s parents was the most significant element of her life. It mattered very much to her to be on good terms with each of them, and this was indeed the main theme of the story.

Others used to expand Charlotte’s world include characters Plaidy featured in various volumes of her Georgian Saga: King George III and Maria Fitzherbert, who had three books between them, and those who had bit parts as well, such as Queen Charlotte of Mecklenburg-Strelitz and Princess Frederica, the Duchess of York. Honorable mentions include the writer Lord Byron, the cartoonist James Gillray, and Charlotte’s special friend, Mercer Elphinstone. The amount of research that must have gone into each of Plaidy’s novels is simply astounding.

When rating this volume among its ten fellows, it falls near the top of the list in holding interest and offering intriguing characters. Earlier this year I trudged through Caroline the Queen (vol. 2 of King George II & Queen Caroline of Ansbach) because the main characters were lackluster, but the side characters saved the book in this reader’s eyes. This one is much the same, but with added points for Princess Charlotte’s charm and candor. I suppose it was hard to form an attachment to her knowing her fate, but the author succeeded in making her story a worthy one.

As for the Georgian Saga as a whole (I have one yet left to read), my favorites remain The Third George and Victoria in the Wings.