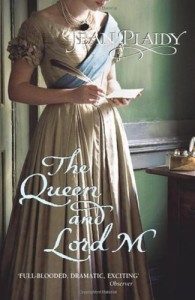 I recently finished a book about the young Queen Victoria and her first Prime Minister, Lord Melbourne, titled Victoria by Daisy Goodwin. It sparked my interest in Plaidy’s version, The Queen and Lord M, which I have not read–although I have read the subsequent novel, The Queen’s Husband.

The Queen and Lord M

“On the morning of 20th June 1837, an eighteen-year-old girl is called from her bed to be told that she is Queen of England. The Victorian age has begun.

The young queen’s first few years are beset with court scandal and malicious gossip: there is the unsavoury Flora Hastings affair, a source of extreme embarrassment to the queen; the eternal conflict between Victoria and her mother, and the young queen’s hatred of Sir John Conroy, her mother’s close friend.

Then there is the Prime Minister, Lord Melbourne – ‘Lord M’ – worldly cynic and constant companion to the queen, himself a veteran of many a latter-day scandal. He proves to be her guiding light – until the dashing Prince Albert appears and she falls hopelessly in love …”

MY REVIEW OF THE QUEEN’S HUSBAND 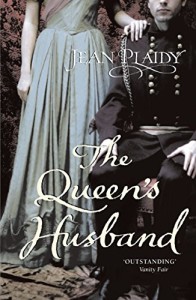 The third of the four-book Queen Victoria series (The Captive of Kensignton Palace, The Queen and Lord M, The Queen’s Husband, and The Widow of Windsor) The Queen’s Husband is a detailed account of Prince Albert’s childhood, youth in Coburg and marriage to the Queen of England.

I chose to read this particular book because I wanted a feel of Albert’s character and this Plaidy delivers in great detail. Affected by the early loss of his beloved mother, and without another to quite fill the void, Albert turned out apathetic and awkward toward the opposite sex. Even so he was very handsome and courteous, which won the young and fiercely independent Victoria over upon their first meeting.

Though not the sweeping love story I had imagined, both the characters of Albert and Victoria are explored in depth, bringing out that psychological analysis Plaidy is famous for. The people called Albert “The German” and resented when he tried to interfere with the government. Both the Tory and Whig leaders, however, saw his calm demeanor and sound advice as a good influence on the Queen.

This is a superb historical account of the political situation in Europe during the mid-1800’s, with France once again turning against the monarchy and many countries making radical changes. Through many family and state upheavals we witness Victoria slowly come under the rule of her husband. The Victorian Age was born with its strict morals and focus on the family, as well as less and less power to the crown.

This novel reads easily as a stand alone.

My favorite quote:
“Should one be provoked simply because an opinion adverse to one’s own is expressed? However much one disagrees one should not for instance…throw a cup of tea.” –Albert’s reaction to Victoria’s “ill-bred” behavior

Plaidy’s Queen Victoria Quartet:
The Captive of Kensington Palace
The Queen and Lord M
The Queen’s Husband
The Widow of Winsor

* Plaidy’s Queens of England series book, Victoria Victorious, was written more than a decade after this quartet.